In many previous years, when preparing my Annual Report, I have tried to measure how we performed during the year, against our Association’s Aims and Objectives. Like 2020, 2021 has been another year like none that have gone before, and it’s just not possible to report the year 2021 in such a precise fashion

2021, started with such high hopes that we were beginning to see light at the end of the tunnel, but how wrong we were and throughout most of the year we continued to have to accept restrictions and all the guidance as to how best we could get through the pandemic, with booster jabs and the like.  I think now, we have all accepted that this Covid Virus is something we are going to have to live with for a long time and must just accept it, as we have with flu.

I am pleased that we have been able throughout 2021 to continue to publish FOCUS each month and our thanks must go to our great ‘Volunteer Army’ of Distributors who bring the copies to your doorstep each month.  January 2021 saw a sparkling new design for the front cover of FOCUS, aimed at highlighting the key contents of that month. This was the first major change in the design of FOCUS, since we made the move to full colour several years ago.  We are conscious that this is your Magazine and in the March 2022 issue of FOCUS, we will be inviting you to participate in a Survey, which is designed to help guide us through any changes that you might feel useful, to make FOCUS an even better monthly read for you. The August issue was a landmark for me, as after 4 years as Editor, I was able to hand over the reins for the September Issue to our Secretary, Janet Moyles.

Whilst mentioning Janet, it should be remembered that in 2021, Dr Janet Moyles was awarded an OBE in the Queen’s Birthday Honours for her services and work in early years learning.  Maybe in the future another award for her services to our Association and for the sterling work of editing FOCUS.

We had hoped that in 2021, we could resume our face-to-face meetings, but sadly that was not to be the case until September when we were able to hold our General Meeting addressed by the Coastal Medical Partnership at the New Milton Memorial Centre.  We returned to the Community Centre for our November Meeting with an excellent presentation by the Managing Director of NMSB – better known perhaps as New Milton Sand & Ballast.   Our January General Meeting and the 2021 Annual General Meeting and Open Forum had to be held via Zoom, as did the special presentations prior to the Public Referendum on the Neighbourhood Plan on 5th May 2021.

It was heartening that the Neighbourhood Plan, which was the result of many years hard work, including by some of our committee, it received huge public support in the Referendum in May with 87% in favour of the plan and with a good turnout of 35+%, unusual for such elections.  The pandemic has continued to affect the really hard work that now needs to begin in earnest, in taking the hopes and aspirations set out in the vision for our town and starting to really make a difference. It's not like a magic wand, the aspirations will take a long time, but with careful planning, consultative work with you all and a will to see change, we really can look forward to a bigger, brighter, and more inclusive future for all of our residents.

On the subject of Planning, Committee Member, Graham Jackson formally adopted the role of Planning Secretary, especially important to us as an Association, as we see the proposals coming forward for the two New Forest District Council Strategic Sites at Brockhills Lane and land to the south of Gore Road.  Time had to be spent during the year by Graham and myself on two other planning issues, the Aldi development at Caird Avenue and the battle over Bradbeers wanting Aldi to take the Station Road ex-Coop site.  Now perhaps we have the best of both worlds, with Aldi where they wanted to be and a new Flagship Store in Station Road with M & S coming to our town, which will be an exciting development for us all.

I was grateful during the year that Steve Sinyard agreed to join our committee and take over the role of Treasurer from Harry Nash, who had been standing in on a temporary basis since our last AGM.  My grateful thanks to Harry for all the time and effort he put into the role before he moved out of the area and welcome to Steve who I know is going to be a great asset to NMRA.

The CiA (Community in Action) sub-group of our Association had an equally difficult year with all their events and visits having to be cancelled.  The Association was however looking forward to being present at The New Milton Christmas Festival, which ultimately also had to be cancelled, ironically this time not due to Covid, but to the hazards of Storm Alwen on the 27th  of November, with gale force winds and heavy rain.

In her role as Vice Chair and lead on community engagement, Julia Stamper has been heading a group to try and facilitate the construction and subsequent maintenance of a Community Garden in New Milton.  With considerable backing both from individuals, schools and other groups, Julia’s team have been fighting for some time to get a decision for a potential site from New Milton Town Council.  This has been dogged by delays awaiting their plans for the future of Fawcetts Field to be formalised, and it is hoped that this Project can come to fruition in 2022.

So ended another difficult year for the Association, but in the main we managed to continue our key  activities in one way and another.  I thank all of you, our members, for your continued support throughout 2021 and I take this opportunity to thank your committee without whose guidance and counselling, my job would be that much more difficult.  So, thank you to all.

My thanks also go to all of you, our members, the readers of our FOCUS magazine for your continued support.

As this is my first report since taking over from Harry Nash during the year in question permit me to introduce myself. I am a retired qualified accountant who moved to Barton with my wife in September 2014 from the north coast of Devon. In Devon we were both heavily involved with volunteer activities for both the RNLI and our village community shop. Since moving to Barton I have become Treasurer for the New Milton and Barton on Sea Fundraising branch of the RNLI, a driver for New Milton Neighbourcare and a member of Lymington Hospital’s League of Friends.

The 2021 accounts have been reviewed and signed off by local accountants, Westlake Clark.

In brief, NMRA added £7,579 to reserves due almost entirely to pandemic related issues. Due to the cancellation of two issues of Focus, £2,139 of advertising revenue was brought forward from 2020. Cancellation or postponement of local good causes and events resulted in a reduction of sponsorship of approximately £3,750.

The problems created by the coronavirus continued throughout 2021 albeit with slightly less intensity than 2020. Activities, both by our association and most others, continued to be curtailed, postponed, or even cancelled.

Both advertising income and subscriptions came in roughly at 2020 levels. As subscription rates were increased 2 years ago no further price increases are planned.

There was no increase in advertising rates during 2021 and no increases are scheduled for 2022. Advertising totals for 2021 were boosted by over £2000 by bringing forward one sixth of 2020 revenues due to cancelled magazine editions. This resulted in discounts and refunds being given against 2021 advertising rates.

Excursions are planned to commence again in March 2022 with a trip to the Lighthouse Theatre in Poole. Revenues received in 2021 will be carried forward. There was no reported income or expenditure during 2021.

Interest on deposited monies amounted to £127, down from £153 in 2020, due mainly to falling interest rates.

The only other income was a donation from the Co-operative Society which was given to fund a litter pick in New Milton and Barton. This was carried out by teams of volunteers.

Community in Action (CiA) was again largely inactive due to the coronavirus. Committee Members did however attend the Craft Fair in November incurring a small cost. Costs paid for the cancelled Christmas Fayre will be used to fund our presence at the Easter Extravaganza.

The main expenditure continues to be the printing and publication of FOCUS magazine. We spent an average of £987 per publication in 2021 compared with £1,200 in 2020. This is due to a reduction of the number of printed copies and some members preferring to receive an on-line copy. However, due to decreased expenditure elsewhere in 2021, notably donations, the ratio of publication costs to the total expenditure increased to 67% from a more typical 50%. Miscellaneous expenditure was boosted mainly by the purchase of a computer for the Editor of FOCUS, mailing software and PPE for the above-mentioned litter pick. 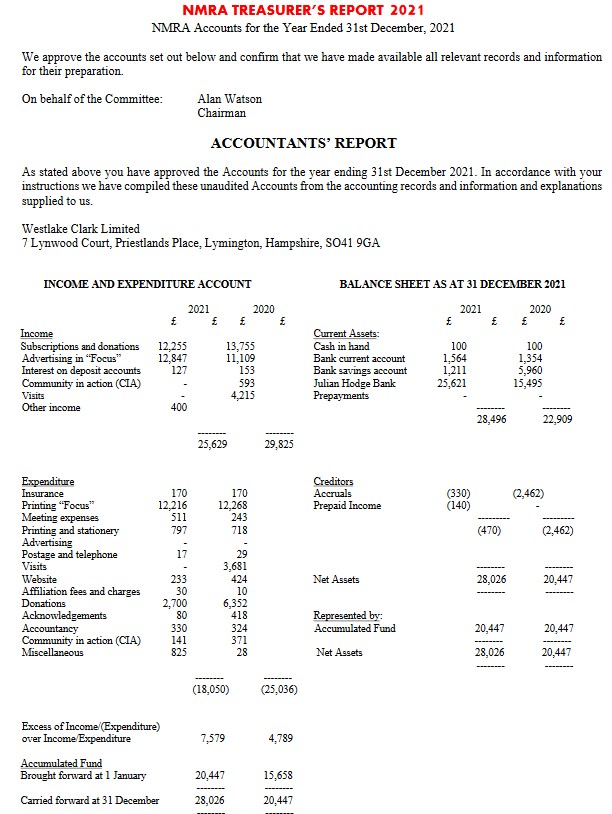